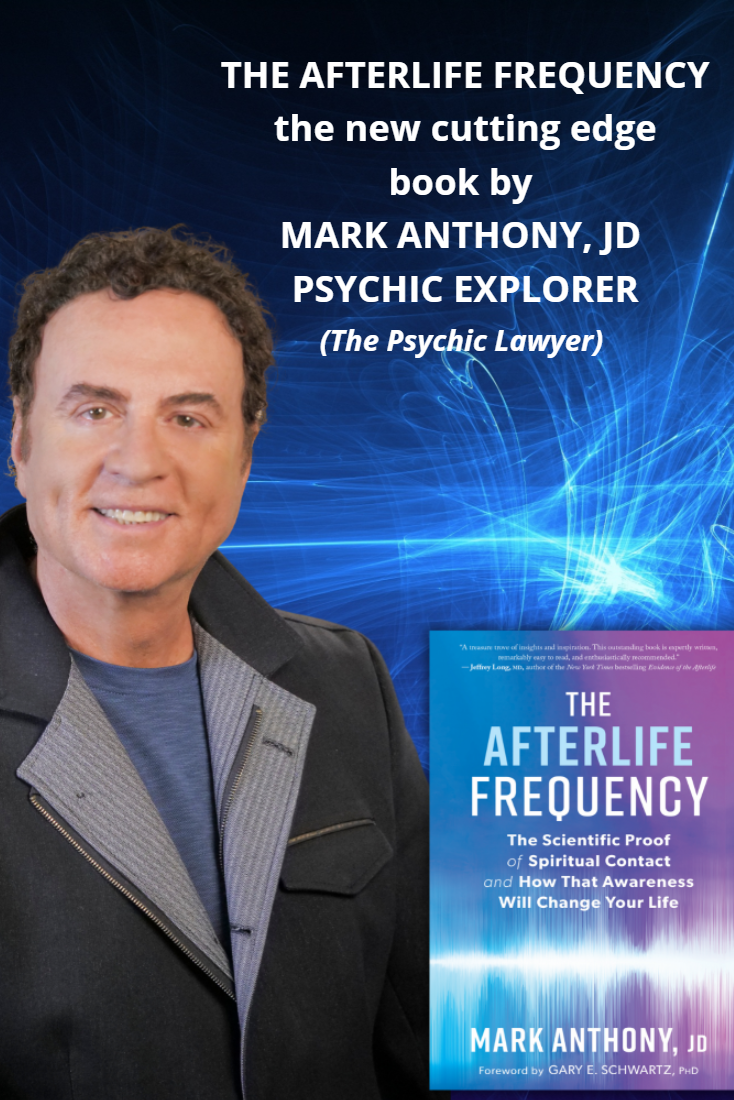 The Afterlife Frequency: The Scientific Proof of Spiritual Contact and How that Awareness Will Change Your Life, is a riveting adventure that reads like a juicy novel transporting the reader around the globe and from the cosmic to the subatomic, even into the human soul itself.

Through uplifting, emotionally gripping and occasionally humorous stories, The Afterlife Frequency reveals how the human experience encompasses spirit communication, whether through a medium, near-death experience, deathbed vision or visitation from spirits of loved ones. Often dismissed as fantasy or feared as paranormal and supernatural, these phenomena are real. They’re all forms of “interdimensional communication” which occurs when the energetic frequency of the soul aligns with the Afterlife Frequency.

My experience with spirit communication began on day one. I was born a medium and chose to become a lawyer. The media dubbed me “The Psychic Lawyer.” Between the stereotypes that lawyers are vampires and psychics prance through flowery fields waving Ouija boards, I’ve been called quite a few things. When you’re a lawyer who sees dead people you better have a good sense of humor.

It also helps to have a strong support group of family and close friends. I’ve been blessed with both, which brings me to one of the most unique people who have been part of my journey through life.

If you’re lucky, you get one friend in your life like Billy. We met in school when we were eleven years old and grew up in the surfing culture of east coast Florida. Best friends, we were together from junior high school through high school and then college. When I went to law school, Billy traveled throughout Asia and learned to speak Japanese. For some years he lived in Tokyo and taught English to corporate executives.

I visited Billy in Asia and The Afterlife Frequency opens with one of our adventures in Thailand.  Billy found it fascinating that I gravitated to the Buddhist temples and engaged monks in discussions about God and the afterlife. He was curious about my belief that God is everywhere and in all of us, and that we are all energetically part of God.

This was part of lifelong ongoing debate we had about God, life after death, and spirit communication, which had begun between us in high school. Like me, Billy was raised Catholic, unlike me he was an atheist. Naturally, I advocated the existence of God and the afterlife. Billy doubted the existence of God and the afterlife but acknowledged I always gave him something to think about.

Years later he met Yuki, a beautiful Japanese woman who was the loved of his life.  As a notary public I have the legal authority to marry people, and I was honored when Billy and Yuki asked me to preside at their wedding ceremony in Florida. After that they moved to California.

No matter how many years transpired since we last saw each other—Billy always found a way to stay in touch. Sadly, like so many people, Billy suffered from depression and succumbed to suicide. I was devastated.

Two years later, I was speaking at a paranormal conference. The main ballroom was filled with tables for vendors and authors. I was at my table autographing copies of my book Never Letting Go. My manager Rocky was with me and she decided to examine some of the equipment used by paranormal investigators. She was particularly interested in the “Spirit Box Scanner” which searches ultra-high radio frequencies with the objective of detecting and recording voices of spirits.

Chris, a well-known paranormal investigator showed Rocky the latest Spirit Box Scanner. It looked something like a small radio and scanned several frequencies until it locked on to a signal. Disjointed sounds and mostly static were emitted from its speaker. Suddenly, the static halted.

“Get Mark,” emerged from the Spirit Box.

“I know that voice!” Rocky gasped and locked eyes with Chris.

“Do you think he means your Mark—Mark Anthony?” Chris asked.

“Get Mark,” the voice repeated.

“MARK! GET OVER HERE NOW!” Rocky and Chris shouted across the room.

The commotion drew a crowd of bystanders which surrounded Chris’s table.

I leapt up and ran to them. The second I got there my heart almost stopped.

“Dude,” came from the device.

My head was spinning.

“Love you Bro,” came out of the Spirit Box and then static filled the speaker.

The onlookers besieged us with questions.

“Billy was my best friend who died,” I explained, “He was a surfer—he always called me ‘Dude’ and ‘Bro.’”

“This is highly unusual! “Chris exclaimed, “Not only did he call Mark by name, but you both positively identified the spirit’s voice as your friend Billy!”

Although this wasn’t the first time Billy’s spirit had reached out to me, it was the first time he did so in a public setting. On the other hand, this was very Billy—no matter how many years, or in this case dimensions separated us, he always found a way to stay in touch.

Endorsed by the world’s top survival of consciousness and near-death experience scientists, The Afterlife Frequency presents groundbreaking scientific concepts and new terminology in an easy to understand and engaging manner. The term “electromagnetic soul” (EMS) describes how our soul is pure energy which never dies—it merely ascends to the higher vibration of the Afterlife Frequency.

Until then, our biology is the technology for spirit communication. The Afterlife Frequency benefits readers in many ways. It teaches you how to work with a medium, and introduces my four-step RAFT Technique which empowers anyone to Recognize spirit contact, Accept it as real, Feel it without fear, and Trust the message. RAFT will not just change your life—it can save your life!

My book also offers healing and inspiration for those coping with grief, PTSD and Survivor’s guilt. The Afterlife Frequency demonstrates how spirits intervene to guide and protect their loved ones in this world, as it presents scientific proof spirit communication isn’t paranormal or supernatural, but a normal part of human nature and a powerful instrument of healing and love.

Mark Anthony, JD, Psychic Explorer® is a fourth generation psychic medium and Oxford educated attorney licensed in Florida, Washington D.C., and before the US Supreme Court. Mark appears nationwide on TV & Radio including CBS TV The Doctors and Gaia TV Beyond Belief. He co-hosts the live stream TV Show THE PSYCHIC & THE DOC on the Transformation Network. Mark is a columnist for Best Holistic Life Magazine and a headline speaker at Conferences and Universities including Brown, Columbia, Harvard and Yale. To order visit: AfterlifeFrequency.com