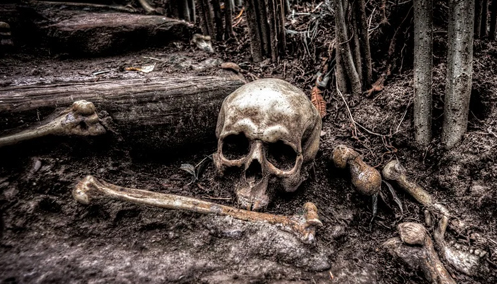 On the evening of March 24th, 1944, 21 year old Alkemade was one of seven crew members in Avro Lancaster B Mk. II, DS664 of No. 115 Squadron RAF.  RAF gunner Sergeant Nicholas Alkemade was sitting in the tail-end of a Lancaster bomber when a German fighter plane opened fire. They were returning from a 300 bomber raid on Berlin, east of Schmallenberg when DS664 was attacked by a German Ju 88 night fighter.  It caught fire and began to spiral out of control. His parachute had gone up in flames! Preferring to die by impact rather than burn to death, Alkemade jumped from the aircraft without it. As he fell the 18,000 ft to the ground he blacked out. He fell 18,000 feet to the ground below, blacking out along the way.

He woke up in a snow drift. His fall was softened by pine trees and snow cover on the ground. Incredibly, Nicholas was alive. He suffered only a sprained leg. The Lancaster crashed in flames, killing pilot Jack Newman and three other members of the crew. They are buried in the CWGC’s Hanover War Cemetery.

He lay there in the snow, blowing his emergency whistle, unaware that a German patrol was quickly making its way towards him. Alkemade was subsequently captured and interviewed by the Gestapo, who were initially suspicious of his claim to have fallen without a parachute.

“You say you fell from a plane, but you have no parachute,” the Gestapo interrogator asked him.

Nicholas explained. The Germans eventually took his word for it (but only after examining the wreckage) and shipped him to Stalag Luft III, where he spent the next 14 months as a prisoner of war.

Nicholas was captured and taken to one of the Second World War’s most notorious prisoner of war camps.

Stalag Luft III, in the German province of Lower Silesia, near the town of Sagan (now Zagan, in Poland), was a secure enclosure operated by the Germans and housed captured Allied airmen.

It has gone down in history as the setting for one of the most audacious prison breaks ever attempted.  So daring, that Hollywood deemed it worthy of a huge blockbuster, and called it the Great Escape. He was a celebrated prisoner of war, before being repatriated in May 1945.