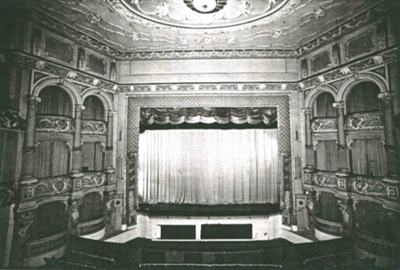 For many decades the St. James Theater has been known to host several residential ghosts that cause many actors stage freight.

Since 1912 the 110-year-old St. James Theater is the official home of the Royal New Zealand Ballet. Many of the dancers reported feeling watched, having their hair pulled, and hearing whispers from behind the curtain. Back in 2006 Jason Hawes and Grant Wilson conducted a paranormal investigation at the theater and determined it was haunted by at least 3 spirits. One of the spirits is the ghost of Yuri who was a Russian Dancer at the theater back in the 1930’s. Legend has it he died after falling from the theater’s rigging. But it was believed that he was pushed by another performer named Pasha. Pasha was known to have a big-time dislike of Yuri.

Performers and stagehands who have encountered Yuri have noticed that he’s known to be very playful. He will mess with the lights, swing open the theater’s doors, and breathe down performer’s necks. In the past the spirit was even credited with saving the life of one of the performers by pushing them out of the way twice.

There are other spirits at St. James that are thought to be not very good. From past reports there appears to be a Wailing Woman. This woman is believed to be an old vaudeville actress who ended her life after getting booed off stage. From past reports she has been known to cause accidents for successful woman in the theater. This woman was very bitter in life. Several years ago, Anna Veitch broke her foot during the performance of The Sound of Music. Several days later Barbara Windsor suffered a bad ankle sprain while performing Carry on Barbara. The Wailing Woman has been known to cry and scream in different parts of the theater. Famous director Sir Peter Jackson claimed to have seen the Wailing Woman in an apartment across the road from the theater. “I woke up one morning and there was a figure in the room, she was very scary, she had a screaming face, very accusatory, she was a lady about 50 years old,” (Peter Jackson)”.  “It was terrifying actually… she was at the end of the bed… she glided across the room and disappeared into the wall (Jackson)”.

In conclusion Peter Jackson’s wife has claimed to have seen the same spirit in the same theater two years before. Both Yuri and the Wailing Woman are the most encountered there appears to be one or two more spirits. Every person that sits and watches the performances could experience something paranormal at any time. Only time will tell if the spirits disrupt another performance. The spirits are known to be classified as an intelligent haunting that directly interacts with the living. We at Dark Matter News will continue to investigate this news story if anything new develops.